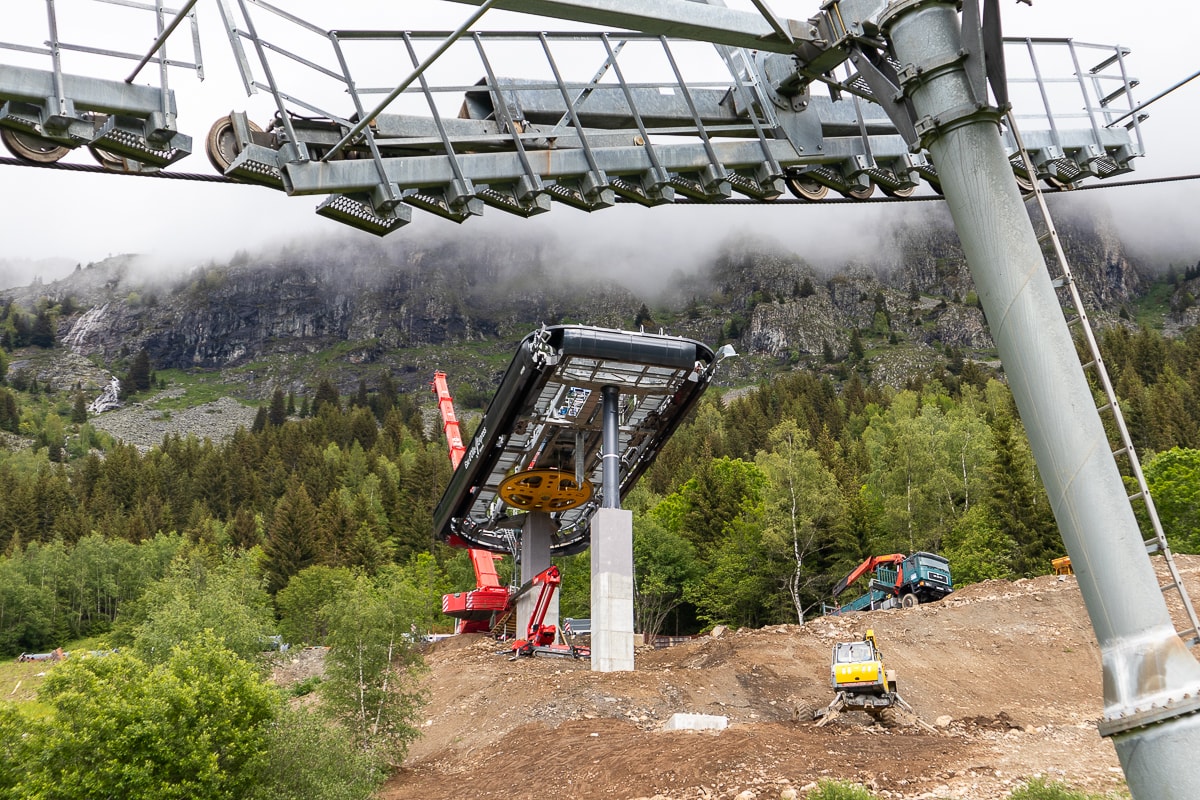 There has been more building in Oz Station on the new ski lift.

The big blocks of concrete poured last year are now being transformed into a recognizable ski lift.

The builders are receiving deliveries almost every day and parts are stacking up in the car parks. Workers are then assembling them into larger components ready for assembly.

The complex structures at either end of the lift are progressing well giving us an idea of how it will look when it’s finished.

The point where the lift line crosses the current Poutran lift is going to look spectacular.

It’s also interesting to compare the terrain in the station with where they are building in Allemond where it is completely flat.

Building with a helicopter

On the way between the ends, the bases for the pylons are being assembled and concrete poured.

Being in the mountains building is done a bit differently with a helicopter taking the place of the traditional concrete mixer truck. It’s hard enough to walk to where the lift line cuts through the forest, let alone get a vehicle there.

A “bucket” is dangled beneath the helicopter and filled with gravel, concrete, etc. at an easily accessible place lower down the mountain and then flown to the base of the pylon.

The “bucket” is designed so that the bottom can be opened and the contents fall out quickly. each bucket has around a cubic meter of gravel or concrete in it, weighing anything from 1-2 tons.

Once there, the builders open the bottom and the mixture falls out into the waiting hole. The dangers for everyone involved are much higher than a normal building site.

The degree of expertise needed to pull all this off is truly exceptional. The flying of the aircraft through the trees, with the usually gusty winds we have during the day, is exceptional.

I certainly hope the calculations needed to make sure it all holds up safely have been double-checked and no mistakes are being made. You wouldn’t want to have to do this twice.

The last conversation I had with someone working on the site indicated that it would be ready before the end of this summer. There is a new sign up in the station indicating an opening date of summer or autumn.

No doubt this new date is caused by the restrictions implemented by the authorities due to the COVID-19 outbreak.

However, this won’t be the end of the works as the smaller lift connecting the base of the Poutran and the base of the Eau d’Olle won’t be built until next year resulting in another summer with more building in Oz Station.

Although this isn’t going to be a big problem for skiers it is going to hamper efforts by pedestrians to walk between the two.

I think they are either going to face a very short steep descent on the snow or a long walk around the houses.

We live here in Oz all year round.

We mainly write about what’s available and happening in Oz and Alpe d’Huez to help you get the best out of your ski holiday. We also write about the other main ski areas locally, Les 2 Alpes and La Grave/La Meije.

We try to cover all aspects of skiing and winter holidays in a more general way to explain why some aspects of the holiday business exist.

We also write about our life here, in the winter, and elsewhere in our local region. As we do a lot of catering, we share recipes for some of the dishes that our guests enjoy the most.

Skiers come here with varying degrees of expertise and experience and a wide variety of expectations; not everyone has, or wants, the same holiday.

We try to cover every aspect of skiing here in Oz and Alpe d’Huez; if you want more details on something in our area, we’d be happy to consider covering it.

It should be noted that when we are commenting on skiing, ski equipment, ski routes or ski techniques or anything, that neither of us are professionals and that we are simply expressing our opinions and impressions.

Absolutely nothing in this blog is intended as a substitute for expert professional information, guidance or instruction.

We enthusiastically suggest you improve your skiing with professional instruction from the various ski instructors mentioned in the blog. We find the ESF in Oz to be particularly good.

The Bureau de Guides is the best source of off-piste information and a day out with them is always a memorable one.

All the opinions here are our own and are necessarily subjective. We have tried to make sure that any facts are accurate, but these can change over time.

Get the Best Price when you Book Direct